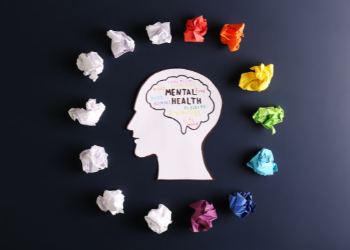 In today’s workplaces, it’s especially critical that employers consider the psychological safety of their workforce.  The potential consequences of not doing so could result in increased WCB premiums through the acceptance of psychological injury claims; discrimination claims through a Human Rights Tribunal and the associated financial and reputational costs; or a violent event resulting from events at the workplace.

This article will explore the potential impact that micro traumas can have on a worker’s mental health, as well as identify practical and relevant controls that can be put in place to prevent the negative behaviours contributing to these micro-traumas and the unfortunate worst-case outcomes. This article will also explore this premise by breaking down an extreme, but real-life situation that resulted in death.

What is a Micro Trauma

Micro Trauma, also called “Cumulative trauma”, is defined as a direct or indirect psychological, emotional and physical distress associated with repeated exposure to seemingly small or insignificant but potentially traumatic events in a work or non-work context that result in the alteration of a person’s character.[1]

For example, a nurse would be exposed to direct emotional and physical distress when dealing with violent and aggressive patients. Alternatively, a nurse would be indirectly exposed to vicarious trauma by dealing with the sufferings of others. While an individual micro trauma may not result in a breakdown of a person’s character, over-exposure to repeated micro-traumas could result in a mental breakdown or burnout.[2]

Alternatively, a worker could be subjected to verbal taunts and abuse, microaggressions, incivility or even minor physical abuse over a period of time. Eventually, a worker may reach a point where the cumulative effect of these traumas results in a breakdown of their normal character where the worker responds with physical force or violence. In short, a worker pushed to the edge by events they feel they cannot control can simply snap.

When events in the workplace and/or personal issues drive a person to break from their normal character the results can be devastating to the workers, company and community. There is no shortage of examples of this, such as the Hub Mall Shooting (EDM) in 2012, Concordia University Massacre (MTL) in 1992, Nanaimo (BC) Mill Shooting in 2014, Loblaws Stabbings (EDM) 2014.

The cumulative effects of exposure to micro trauma may have significant negative impacts on workers’ overall mental health. Signs that an employer may see indicating an issue would be similar to the symptoms of Post Traumatic Stress Disorder.  Workers across all industries may be at risk of developing a mental condition similar to post-traumatic stress disorder (PTSD) through being exposed to microtrauma.[3] Many of the symptoms of PTSD are also identified in the Mental Health Continuum Model under the injured or Ill sections.

According to the Mayo Clinic (2022), the symptoms of PTSD may include but are not limited to: 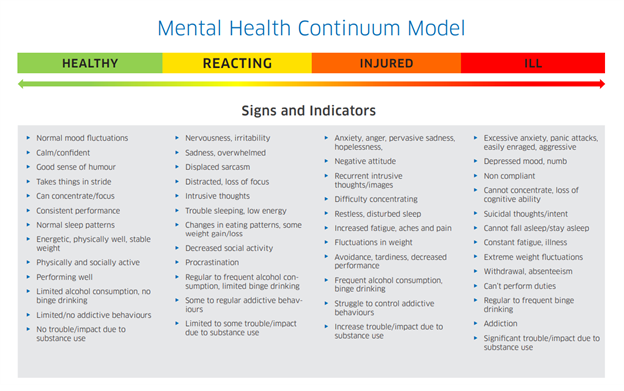 Workers that are the victim of repetitive and cumulative bullying and harassment, at work and/or in their personal lives, may experience symptoms similar to PTSD. The impact of such abuse could lead to a range of outcomes. In the vast majority of cases, the outcome is not workplace violence. Many of these cases of repetitive bullying and harassment will likely go unreported, be resolved or remain at a tolerable level of acceptance for the worker. However, in rare circumstances, it could result in an act of violence against the alleged perpetrators or other coworkers.

The assault cycle is a useful proxy to help visualize the impact that cumulative micro traumas can have on an individual’s mental health. This identifies the escalation of violence from baseline behaviour, through escalation, a violence episode through de-escalation to recovery to baseline.[5]  Applying this model to micro traumas may provide insight into how and when to apply controls to prevent, mitigate or triage people who are the victims of workplace bullying and harassment.

During stage one, the individual is acting with their normal patterns of behaviour. This is the point where primary interventions should be applied. This would help to maintain a baseline level of behaviour.

In stage two, this individual becomes a victim of perceived bullying or harassment. Over time, multiple psychological injuries begin to accumulate, causing the individual to alter their baseline behaviour. In most cases, individuals will apply coping mechanisms, resign, resolve the matter, or achieve any other acceptable outcome. This is also the time when some primary interventions could still be applied and secondary interventions should be applied.

During the third stage, a mental health incident occurs. This could consist of a range of mental crisis events such as a mental breakdown, shouting or other associated behaviour. In this case, the employer is working to deescalate the situation. In extreme cases, an overly aggressive or violent episode could occur. If that were to happen, the employer is activating their emergency response plan.

In stage four the individual begins the process of recovery and a return to a baseline level of behaviour again. Depending on the behaviour displayed in stage three, the employer may apply interventions to mitigate the impact on the individual’s mental health as well as their co-workers’ mental health. The damage is done, so the employer will be in damage control mode. However, if stage three was an act of violence perpetrated against a coworker, there are interventions available to prevent a future episode.

This cycle in theory could repeat itself numerous times, with different levels of severity. In most cases, the worker will never become violent.

The first intervention and the most effective level of control is by building a psychologically safe and healthy organization through the development of a healthy organizational culture. This begins with a well-thought-out human resources program coupled with a strong health and safety program, including a focus on psychological health and safety.[6]

Examples of possible interventions include but are not limited to:

This is arguably more difficult however, focus on changing behaviour and building mental resiliency. Specific controls available to workers include but are not limited to:

This level of intervention focuses on damage control after a worker has experienced a break in their character due to the effects of the micro traumas.  At this point, we are focusing on managing and supporting the worker.

Examples include but are not limited to:

Harford Distributors was a beer distribution company located in Manchester Connecticut. On August 3, 2010, Omar Thornton, an African American, was given an ultimatum by his manager. “Resign or be fired”. As he was being escorted out of the warehouse, he removed a gun from his lunch box and began shooting.  Eight co-workers were killed and two injured. Thornton called his mother to tell her that “I killed 5 racists” before turning the gun on himself.[10]

This incident is an example demonstrating this model and in no way a justification for the actions taken by Omar Thornton that day. It only strives to explain how he got to that point and what could have been done to prevent it.

Recurrent Situations triggering a reaction – Omar appeared to be generally unhappy with his situation in the company. Repetitive racist comments and behaviours were present during the time he worked at Hartford Distributors. His emotional reactions to these comments became more pronounced over time, as he complained to friends and family more and more leading up to the incident.

Self-Destructive Behaviour – He also engaged in self-destructive behaviour by stealing beer from the company, having known that there were cameras in the warehouse.

Negative emotional reactions – Omar additionally, engaged in verbal arguments with coworkers, which culminated in a planned or potential act of violence. This is demonstrated by the fact that he hid a gun in his lunch box that day and that he targeted five specific people, while specifically overlooking two disabled workers in the room at the same time.

Stage 1 – In stage one, his family described him as a calm and gentle person.

Stage 2 – From reports, it appears that Omar Thornton perceived that he was the victim of workplace bullying and harassment.  Throughout his employment incidents of racism, arguments and performance issues may have begun to impact Omar’s mental health. This culminated in a situation, where he felt the need to carry a gun in his lunch box.

Stage 3 – Having been given the ultimatum, “Resign or be fired”, Omar had a severe break in his character. This resulted in him taking out his gun and shooting five of his likely intended victims and three additional workers.

Stage 4 – Omar locked himself in an office and called his mother to tell her what he did. The situation could not be deescalated as he took his life shortly after making that call. He did not have the opportunity to return to his baseline character identified in stage 5.

A potential root cause of this violent event can be attributed to management’s lack of control. First, he complained about the job not meeting his expectations, as he thought he was hired as a driver. With a strong HR policy and a hiring process, every worker should have a clear understanding of their job. In addition, he complained about seniority. Perhaps, if this was documented and explained at hiring, he may have known and understood how it worked in the company.

Another root cause appears to be management’s inability or willingness to prevent bullying and harassment, in this case, overt acts of racism. In principle, if management had a policy and it was enforced, the acts of racism may have stopped or been reduced.

A final root cause is found in the lack of management control in the termination process. I like to explain to my manager and supervisors that no worker should be surprised that they are being terminated. However, that termination needs to be handled respectfully and by a process. To offer an ultimatum to Omar was the trigger. Handling the situation differently may have prevented the incident.

As this case study shows, several factors drove Omar to violence. This violence was arguably the result of bullying and harassment in a less than ideal work environment. With the benefit of hindsight, we can identify some of the symptoms of PTSD that demonstrate that Omar may have been a psychologically injured worker.  Based on the news stories, we are also able to see how the cumulative effect of micro traumas impacted the mental character of Omar and how he moved from his baseline behaviour to a breakdown. Perhaps most importantly, we can see how this event could have been averted through the application of early interventions.

[12]Ruling Of “No Racism” In Infamous Connecticut Murder-Suicide (May 13, 2011) https://newsone.com/1229515/omar-thornton-shooting-police-no-racism-connecticut/

[13]Ruling Of “No Racism” In Infamous Connecticut Murder-Suicide (May 13, 2011) https://newsone.com/1229515/omar-thornton-shooting-police-no-racism-connecticut/

[14] Ruling Of “No Racism” In Infamous Connecticut Murder-Suicide (May 13, 2011) https://newsone.com/1229515/omar-thornton-shooting-police-no-racism-connecticut/

The @rcmpmb need your help. If you have been hauling Highway 1 east, your dashcam footage could be vital information for police.

Delivering effective feedback becomes a basic skill that all supervisors, managers and leaders need to practice.