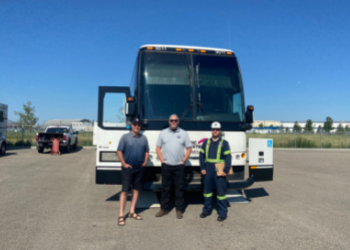 The Alberta Inspectors Championship is an opportunity for top CVSA NAS inspectors to compete against each other in various commercial motor vehicle inspection events.  The competition starts with a written exam where the inspectors are tested on their knowledge of Dangerous Goods, CVSA inspection procedure, policy and their ability to apply the CVSA North American Out-of-Service criteria.  Inspectors that obtain the highest scores on the exam continue on to the second phase of the competition.

The second phase of the competition includes a personal interview where inspectors are asked a series of CVSA related questions from a panel of judges.  The contestants are judged on their communication skills, knowledge, professionalism, judgement and analytics.  This is a timed event where the inspectors are under the gun to come up with a quick well thought out response.

Once the personal interview is complete the contestants go on to the practical inspections where they are judged on inspection procedure and their ability to correctly identify violations.  There are four inspection events:

Once the practical inspections are completed the scores from all events including the written exam are tallied, and the inspector with the highest score is crowned grand champion.  The following is the result of the 2022 Alberta Inspectors Championship:

The grand champion of the Alberta Inspectors Championship may have the opportunity to represent Alberta and the Sheriff Highway Patrol at the North American Inspectors Championship (NAIC) in Indianapolis, Indiana in August.  NAIC is a competition where the top inspectors from each jurisdiction in North America gather to compete against one another and receive training on the latest commercial motor vehicle safety technologies and techniques.

Congratulations to all AIC competitors.  It takes a lot of confidence to enter a competition where you are submitted to tight timelines, difficult inspection scenarios and peers judging you at each event.  My hat goes off to each and every contestant that took part in the competition this year.

Best of luck to Sgt. Thompson on his NAIC journey.

Help to build a greener future for all – be part of Canada’s first heavy-duty alternative fuel pilot.

There’s no cost to participate and training is provided.

If you're hauling on #TransCanada through #BritishColumbia please note, a 35km stretch is still closed from Spences Bridge to Lytton because of a mudslide. https://twitter.com/DriveBC/status/1557727154162438146