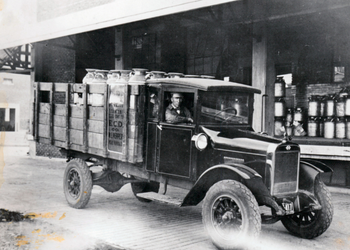 This article has been accepted for publication by Western Canada Highway News; their digital editions can be accessed at this link.

Safety in road transportation has evolved with technology, infrastructure, and societal expectations.  Road planners have the challenging task of building highways today that account for future use given the resources, standards, and predictions available to them.  While driver training and vehicle system improvements save lives, it is my opinion that infrastructure makes the biggest difference when it comes to increasing safety for motorists.

In 1966, the President of the United States, Lyndon Johnson, placed William Haddon in charge of what is now known as the National Highway Traffic Safety Administration (NHTSA).  Haddon had made a name for himself as a safety researcher who, along with others, helped shift the focus in safety from individual behaviours to the controlling of the conditions that lead to injuries.  Once he was in charge of an organisation responsible for highway safety, he implemented new safety standards that dramatically reduced highway fatalities by reducing the dangers posed by the roadway itself.  By 1974, these changes had reduced fatalities from 5.7 to 3.3 per million miles of vehicle travel [1].

However, what passes for the best standard today is often made quickly obsolete by innovation and demands for better performance: today’s roads are the dreams of yesterday and lay the groundwork for tomorrow’s safer highways.  I’ll present some of the history of Western Canadian highways to reflect on how far our highway network has come.

From the 1850’s to 1880’s, many goods came to Alberta and Montana by steamboats on the Missouri River.  However, steamboats couldn’t travel farther than Fort Benton, MT, so goods were transloaded from the boats to bull trains which travelled to the infamous Fort Whoop-Up in the area that is now Lethbridge, AB, on Siksikaissksahko (Blackfoot land) [3].  The Whoop-Up Trail can be roughly followed by driving Montana Highway 223 from Chester to Fort Benton after taking Alberta Highway 4 and then I-15 and US Hwy 2 after entering the USA.

The Whoop-Up trail is just a single example of an early settler-coloniser trade route that has changed to highway.  Long before the arrival of European settler-colonisers to Western Canada, First Nations’ trails provided strategic transportation through their vast territories; many highways follow these ancient trails.

During World War Two, the United States and Canada saw the need to create a highway to Alaska from the lower 48 states so that military forces could be moved quickly to head off a potential invasion from the pacific coast.  Construction started in March of 1942 and was completed by October of the same year, linking Dawson Creek, BC with Delta Junction, AK.  This original Alaska Highway was rough and full of difficult grades and curves; over the past decades it has been continually improved as it’s traffic load has increased.  It is now a year-round major trucking route and part of the CANAMEX corridor [4].

Ed Caron, founder of Caron Transport Systems, said temperatures got so cold during winter on the Alaska Highway that grease and oil in the differentials and transmissions of the trucks would freeze up.  To prevent this from happening during rest breaks, drivers would jack up the rear ends of their straight trucks and leave them running in gear to keep the entire powertrain moving, a challenging practice during a time when the trip from Dawson Creek to Whitehorse took nearly four weeks [5].

With the growing demand for highway transportation after World War II, the Trans-Canada Highway was started in 1950, opened in 1962, and was officially completed in 1971 [6].  Alberta played a major role in the design of the Trans-Canada Highway.  During the 1950s, Alberta was rapidly building roads.  At that time, roads were poorly-built and often did not follow good engineering standards and, as a result, often required expensive repairs early into their service life.  Minister of Transportation Gordon Taylor – who held the position from 1951 to 1971 – was able to convince industry and government to build roads to a higher standard and, in a pioneering move for the Province, with shoulders.  During the construction of the Trans-Canada Highway, Federal Minister of Highways Bob Winters was so impressed with this design that he ordered all other provinces to follow Alberta’s lead, a major safety innovation for the time [5].

Like shoulders, twinning is another major safety improvement to any road.  A twinned road nearly eliminates the hazard of an oncoming vehicle collision, and presently, British Columbia is taking road safety to a new levels as it works to complete the twinning of the Kamloops-to-Alberta portion of Highway 1.  In Southern Alberta, what started as a dirt track alongside the railway has become Highway 3, and this road was gradually improved due to the demands from increased traffic, was fully-paved by the early 1960s, and saw its first twinned section between Lethbridge and Coaldale.  The Highway 3 Twinning Association is advocating for the full twinning of this highway to improve safety and open the area further to trade [7].

Two big challenges always stood out to me when I was trucking: getting through major cities and getting over big hills.  Road builders in Western Canada have done incredible work creating a highway network that navigates the rugged landscape of the Rocky Mountains and always-changing urban centres.

The Kootenay Pass is one of the most extreme mountain passes on our main highway network.  Also known as the Salmo-Creston Hill (it connects the towns of Salmo and Creston, BC), it is the highest-elevation road in Canada that is open year-round and contains seemingly-endless stretches of 8% grades and tight turns.  While the pass is a dangerous stretch of road, the difficult terrain in the Lower East Kootenays was far more challenging to navigate before the pass opened in October of 1963.  Before that date, the Kootenay Lake ferry was the most direct route available between Salmo and Creston and still remains a viable route, especially when the pass is experiencing challenging winter conditions.

Further north, drivers use the Roger’s Pass to move east and west on Highway 1.  In the mid-1800s, surveyors were looking for the easiest possible routes through the mountains so they could build the Canadian transcontinental railroad, and although the relatively tame Yellowhead Pass (home to Highway 16) was the simplest way to go, a more southern route was wanted.  In 1881, Canadian Pacific Railway surveyor Albert Bowman Rogers identified the pass as the best route for the railway and it is named in his honour.  On a side note, Albert Rogers also first surveyed the Rogers Pass in Montana (Hwy 200) in 1887.

In 1962, the Rogers Pass was officially opened for vehicle traffic.  The pass has undergone many improvements over the years, and the Royal Canadian Artillery currently provides avalanche control through the use of modified 105 mm C3 howitzer guns [8].  Once in Kamloops, BC, the Coquihalla Highway (Highway 5) provides a twinned route to Hope, BC and eventually on to BC’s southern coast.

During the 1960s, residents of Hope, BC and other communities lobbied the government for improved road access between the lower mainland and Kamloops.  In the late 1970s, work began on the Coquihalla Highway and was fast-tracked in 1984 to be open for Expo 86 (a world fair showcasing advancements in transportation and communication which was held in Vancouver in 1986).  Day and night construction during 1985 completed the Hope – Merritt section of the highway, and all phases of construction were completed in 1987 [9].  Originally a toll road, the fees ceased in 2008.  From that point onwards, Highway 5 has remained a free-access road for all users and, despite its challenging reputation, is a masterpiece in mountain highway engineering.

Getting through dense urban areas is just as important as navigating rugged terrain and is complicated by attempting to plan for possible urban expansion and future economic activity.  Planning for a Calgary ring road began in the 1970s when land was designated for future high-speed use for a city bypass.  As Calgary began to grow, it became obvious that there was going to be a need in the future for a road to direct through-traffic around the busy Calgary core.  Construction on the Tsuut’ina Trail, or Stoney Trail, started in the 1990s.  The northwest portion of the ring road was the first to be built and was opened in 2009 with some traffic lights still in place.  The final leg was completed in October of 2021, and truckers moving through the area can get through in any direction without leaving twinned roadways or stopping for traffic lights.

Prairie cities tend to sprawl, so planning a ring road for centres like Regina, SK and Winnipeg, MB present big planning challenges.  Fortunately, highway planners have been generous in their future assessments and have built and are building bypass roads for these cities that allow for significant future growth.  Planning for the Regina Bypass began in the 1990s and recently saw the completion of a significant southern expansion allowing for the seamless bypassing of the traffic light-laden city core.  The current Regina Bypass plan includes projects looking as far ahead as 2049 [10].

Further east, Winnipeg has seen constant transportation-related development since its incorporation in 1873 on traditional First Nations’ and Métis’ territory [11].  Winnipeg began bypass road construction in the 1950s and, in the late 1980s, began to transition the bypass road to a freeway by controlling access to the road through limited interchanges [12].  Present development activities and accomplishments include the reduction of level crossings and collaborative engineering with flood mitigation infrastructure.

Highway history is safety history.  While transportation developments in Western Canada have not been linear, they have trended upwards in terms of safety standards as we demand safer road access to our country.  We should keep in mind the monumental efforts of those who have worked to bring us to where we are today.

3 – City of Lethbridge. “Oki and welcome to the lands of the Blackfoot people.” 2021. Accessed April 22nd, 2022 from https://www.lethbridge.ca/NewsCentre/Pages/Oki-and-welcome-to-the-lands-of-the-Blackfoot-people.aspx

We are featuring, along with our friends at @hyzonmotors their fuel cell EV as part of the @hyfcell_Canada event. This #hydrogen semi truck as been the star of the convention so far.

Day 2 of @hyfcell_Canada conference gets underway at @yegconvention. Important stakeholders, members of Government, both Municipal and Provincial, all here to move the #hydrogen economy forward.

Check out the day's agenda for the conference below.
#fcell2022 #fcelledmonton