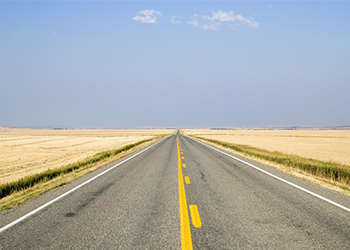 The Alberta Government has announced the twinning of a 46-kilometre stretch of Highway 3 between Taber and Burdett.

In January 2020, twinning sections of Highway 3 to provide safer travel corridors in Southern Alberta was announced as a top priority to the AMTA and was added to the association’s Compliance and Regulatory Affairs Department Top Five Infrastructure Policy Positions.

“The Alberta Motor Transport Association applauds the announced twinning of 46-kilometres of Highway 3,” said AMTA President Chris Nash. “Above all, the commercial transportation industry values safety. This construction provides a safer stretch of road for commercial drivers and the motoring public, while ensuring goods get where they need to go.”

Designed to improve long-term productivity, the Highway 3 twinning project is part of the more than $10-billion infrastructure spending announced as part of Alberta’s Recovery Plan. This stretch of road will particularly serve the province’s agricultural sector.

“The agri-business sector is a key part of Alberta’s economic recovery. That’s why we are investing in critical infrastructure that creates jobs now and ensures that we can support the growth of this important sector,” said Transportation Minister Ric McIver in a release. “Twinning Highway 3 makes the roads safer, more efficient, and gets Albertans working when jobs are needed most.”

The twinning project will support about 755 jobs.

“We need to build, diversify and create jobs following the largest financial hit in Alberta’s history,” said Premier Jason Kenney in a release. “These projects lay the foundation for the private sector to create thousands of well-paying jobs for workers while creating many spinoff benefits for Alberta — including making communities more attractive to businesses looking to relocate. A strong highway network is vital to create jobs, spur economic growth and get Alberta back on track to economic recovery and growth.”

Studies of the entire corridor have been completed by the Highway 3 Twinning Development Association (H3TDA), with 13 sections of road identified. H3TDA recognizes there is still some environmental and historical planning to come, as well as engineering design and more, but is looking forward to making progress on the project.

Human trafficking is one of the fastest growing crimes in Canada. #WorldDayAgainstTraffickingInPersons and organizations like @NIMCAlly help shed light and educate for safe practices for children, women and men. Read more: https://amta.ca/wp-content/uploads/2020/07/Trafficking-Bulletin.pdf

Thank you Minister @RicMcIver for your recognition of the commercial transportation industry, we look forward to our continued work together! #strongertogether #keepitmoving #thankatrucker

@AMTA_ca @jkenney @YourAlberta We thank @AMTA_ca for working with @YourAlberta looking for ways to make life better for the women and men who deliver much of the world to us - on a truck - especially during COVID when it became so very clear how dependant we are on the trucking industry for lifes necessitates.