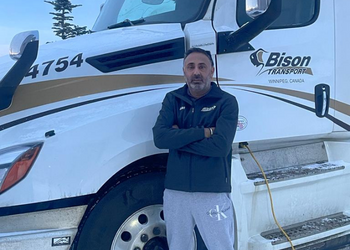 Shavinder has been in the industry a little over 20 years. He has spent the last five with Bison with no accidents to date, with a consistent 0 (low) safety rating.

Starting with Bison in 2017 as a company driver based in Edmonton, Shavinder initially drove single but moved to teamwork running to Winnipeg. He made the move to owner operator just over a year later. Shavinder is consistent in his work, never complaining and always communicating problems and offering solutions. Shavinder was the winner of Bison Driver of the year 2022 in the west.

Shavinder is always direct and communicates his needs while always striving to deliver the best Bison product possible. He’s willing to do alternate work outside of his scheduled run to ensure success.

This award honours a person who contributes to improving and enhancing the commercial transportation industry and providing valuable input on its growth. Find details here: https://bit.ly/3jP5DUj