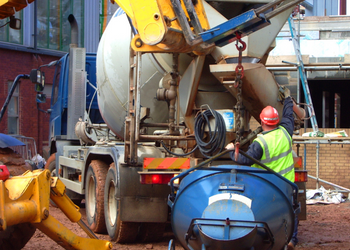 AMTA’s Compliance & Regulatory Affairs (CRA) committee, in collaboration with provincial governments, has brought about a significant policy change that is sure to please concrete haulers in Alberta.

Tandem-steer, tri-drive straight trucks are a staple in Western Canadian concrete hauling.  Despite their popularity, the four Western provinces have traditionally permitted these vehicles at different weights, leading to challenges for carriers when spec’ing new equipment.

It is now possible to operate this configuration, under permit, up to 37,000 kgs: 24,000 kgs on the tridem drives and 13,600 kgs on the steers with an interaxle spacing of at least 5.0 m.  With Manitoba being the final Western province to allow a similar permit, such a vehicle can be operated in each of these jurisdictions at these weights on approved routes.

“Originally, trucks couldn’t be sent between different areas and used to their full capacity,” said Dave Schmidt, the Fleet and Training Manager with Lafarge for Western Canada and AMTA Board Member.  “Now, there is a universal straight truck for the Western provinces – a big improvement for the concrete industry.”

Fleet universality isn’t the only benefit to the industry, either.  “Larger loads can now be hauled, resulting in fewer trucks for the same amounts of concrete,” said Schmidt.  “We are able to service Alberta with fewer drivers while emitting fewer greenhouse gas emissions, all while purchasing fewer trucks.  A lot of carbon is produced in building a truck.”

While this policy change focuses on the concrete industry, it is not company-specific.  “We hope to see all employers take advantage of this change if it helps in their operations,” said AMTA’s Andrew Barnes.

CRA has been active over the past year.  This recent interjurisdictional policy change shows how collaborating with government and across borders brings value to the daily operations of carriers throughout Alberta and beyond.

A great turnout from all our volunteers at Leduc today... a big 'thank you' to all.

The temperature didn't chill the spirts of the volunteers as AMTA Driver Appreciation Days concluded at the VIS near Leduc September 19th.

300 bags handed out in just a few short hours.

The temperature didn't chill the spirts of the volunteers as AMTA Driver Appreciation Days concluded at the VIS near Leduc September 19th.

300 bags handed out in just a few short hours.