Highway 1A widening agreement in place 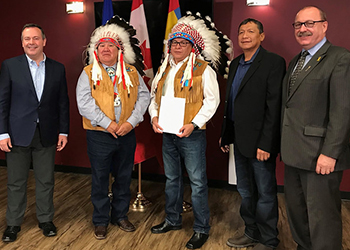 Alberta Transportation and the Stoney Nakoda First Nation have signed an agreement for the transfer of lands needed for the widening and upgrading of Highway 1A.

The agreement with the Stoney Nation will move the widening project forward. The Government of Alberta has already started survey work to define the scope of the project, which will widen sections of the highway between Cochrane and Canmore.

Total funding for the project is $76.5 million. Budget 2019 allocates $26.5 million in the four-year Capital Plan. The remaining $50 million will flow in future years.

The highway widening project will increase safety for the approximately 2,000 vehicles that travel the highway daily. It will improve traffic flow between Cochrane and Canmore, as well as access to the Ghost Lake Recreation Area, which is a popular recreation destination.

The highway has not been significantly upgraded since it was built in 1946.

It's #NationalFishingWeek and the AMTA wants to see photos of your favourite fishing spot! Whether you stop at a popular river while transporting goods or fish with the family on the weekend, share and tag us with #reelsweetshot and you could win! Draw takes place Friday, July 10

FYI for #Carriers and motoring public in the area this evening... #drivesafe #wideload