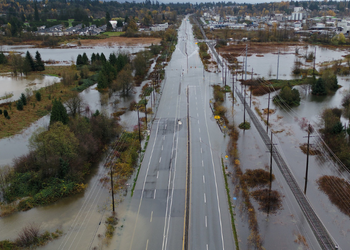 BCTA stresses the best resource for real time specifics will always be Drive BC (www.drivebc.ca ). They will NOT be providing notice of real-time highway conditions as their provincial government is best positioned to do this.

Highway 1 will reopen through the Fraser Valley between Chilliwack and Abbotsford at 2 p.m. (Pacific time), Thursday, Nov. 25, following cleanup, repairs and geotechnical assessments of the highway and its structures.

This reopening will help connect the Lower Mainland through to Highway 3 and the Interior. While this will help to reduce congestion on Highway 7, travel restrictions will remain in place on Highway 7 to ensure the safe movement of essential goods and services

Although it is not subject to the essential travel order, people are asked to stay off Highway 1 through Abbotsford unless necessary. Drivers can expect slow traffic with reduced speed limits. When the highway reopens, the interchange at No. 3 Road will not be accessible due to closures on the municipal road network

Commercial vehicles over 63,500 kilograms are prohibited from travelling on Highway 1 between Abbotsford and Chilliwack at this time

Highway 1 Fraser Canyon remains closed from Boothroyd through to Spences Bridge – damage assessments are ongoing. At this time there is no ETA on reopening.

Environment and Climate Change Canada has issued a special weather statements in effect for Metro Vancouver, the Fraser Valley, Squamish to Whistler and the Sunshine Coast from now into next week. Flood conditions may arise in the areas over the period of these storms. The River Forecast Centre has issued high streamflow advisories for all regions of the Coast

Environment and Climate Change Canada has also issued a special weather statement in effect (winter storm warming) for Highway 3 – Paulson Summit to Kootenay Pass, with snowfall accumulation of 30 to 40 cm.

It is critical that carriers ensure their drivers are well stocked on supplies, fuel and chains to travel these roads

which is expected to be very slow moving with multiple stoppages to allow for movement of emergency vehicles.

We can’t stress it enough, please tell your drivers to obey all posted speed signs and drive with an abundance of caution

as this will be the first time for many commercial drivers will be navigating Highway 3 and the supporting connectors.

Tires and chains regulations in BC

Government of BC’s tire and chain regulations, which mandate placement of chains based on vehicle configuration, can be found here.

Drivers must obey winter tire and chain signs throughout the province from October 1 to April 30. For select highways not located through mountain passes and/or high snowfall areas, tire and chain requirements end March 31.

With Highway 11 closed to all traffic between Downes Road and McCallum Road, the City of Abbotsford is advising heavy truck drivers to use Mt Lehman Road and Harris Road as the alternate temporary truck route.

Please have drivers refrain from using Gladwin Road as intersections along this route are not wide enough for truck turning movements at intersections and traffic backups are occurring.

This temporary truck route is preferred for both entry and exit purposes to the City from the east for the foreseeable future.

A map of this detour can be found on the City Abbotsford’s site found here .

The Government of Canada has approved a Request for Federal Assistance from the Province of British Columbia to help with their response to extreme flooding in the province.

The impact of the flooding is widespread, including in multiple Indigenous communities, and the emergency response is complex, requiring cooperation across all layers of government.

In recognition of the significant, immediate challenges, the federal government is waiting normal EI rules for those directly impacted by the flood, including those that normally would not qualify for EI.

This include waiving the requirement to show a record of employment, recognizing that it may be difficult for many to obtain proper documentation under the circumstances.

Details on the federal financial relief program, can be found here.

If you have commercial drivers, and/or power units that are available to provide support to other carriers that are supporting relief efforts, please email LevanaH@bctrucking.com

In your email to Levana, please advise the following:

The US Federal Motor Carrier Safety Administration (FMCSA) has issued a Regional Emergency Declaration to facilitate movement of Canadian goods through the United States to bypass road closures and areas in Canada cut-off by flooding and landslides.

This declaration complements recent changes made to the US Customs and Border Protection (CBP) in-transit program (included below, CBSA and CBP Joint Update, issued November 22, 2021) and will allow additional options for Canadian carriers and drivers in re-establishing key supply chain links to British Columbia and Western Canada.

The declaration provides an exemption from certain regulatory requirements in the Federal Motor Carrier Safety (FMCSRs) and is limited to Canadian motor carriers and drivers providing emergency services or transporting essential goods, supplies and equipment from Canada to other points in Canada through to bypass road closures and areas in Canada cut off by flooding and landslides

The declaration, as written, can be broadly interpreted. BCTA, through CTA is working with governments to seek additional guidance and applicability to Canadian trucking operations.

Key highlights of the regulatory relief provided by FMCSA include:

Carriers are encouraged to carefully review the full details of the FMCSA declaration and the Notice of Enforcement Discretion to determine and its suitability to their operations.

Not included in the regulatory relief were considerations for domestic Canadian Weights and Dimensions to be allowed during In-Transit movements. BCTA thanks CTA who has prepared a document to serve as a basic guide to assist carriers in this area which can be found by  here.

Options for additional relief from the International Registration Plan (IRP), International Fuel Tax Agreement (IFTA) and FAST / TWIC requirements for the movement of Dangerous Goods are still being considered by governments.

If you have questions on this declaration, please do not hesitate to reach out to your BCA office.

Due to extreme weather conditions in British Columbia, Canada that have caused flooding, landslides, road closures, and other supply chain disruptions, Canadian domestic truck carriers may need to transit through the U.S to reach destinations in Canada. Any Canadian carriers that currently operate between the U.S. and Canada as well as domestically are encouraged to follow the standard procedures for transit, including the advance filing of an electronic truck manifest and utilization of an in-bond or in-transit transaction. This will facilitate crossing and decrease delay at the border that will be caused by these temporary measures.

The requirements below are designed to be utilized by Canadian domestic truck carriers that don’t normally cross the border in the normal course of their business as well as providing some guidance to international carriers carrying Canadian domestic shipments during the duration of these procedures.

The following guidelines for this special interim measure have been developed in consultation with various Industry Stakeholders, USCBP, and Other Government Departments within Canada and the United States to facilitate the movement of goods impacted by the current flooding situation in B.C. while also respecting the relevant laws and regulations that govern our joint CA-US border and national interests.

The following requirements are available to Canadian domestic truck carriers that do not have electronic manifesting capabilities or ability to file as a bonded carrier.

There is no change to existing guidance and communications regarding pandemic related matters.

Commercial drivers, as persons employed in the trade and transportation sector and crossing the border in this capacity, are considered under the existing provisions for truckers.

Pre-arrival testing, quarantine requirements and post arrival testing are not required for persons in the trade or transportation sector who is important for the movement of goods or people, including a truck driver or crew member on any aircraft, shipping vessel or train, who enters Canada for the purpose of performing their duties as a member of that sector.

These temporary interim measures are subject to change and/or may be updated as the situation evolves. We will communicate further guidance and/or updates as applicable.

We are so proud to be an #Alberta association. When responding to a twitter poll about who should be the 'Queen of Alberta Music' @kdlang and @jannarden each voted for the other person. Such an #albertan thing to do.

On International Holocaust Remembrance Day, we remember those who lost their lives in the Holocaust and honour their legacy.
#HolocaustRemembranceDay